Congratulations to Laura for having her name pulled to receive the Traveling Stash! She blogs at Annals of Creation.

I have been rather lazy lately. My sewing projects have not progressed much farther. Part of the delay is I started a counted cross stitch and forgot how long they take. I had surgery a few weeks ago and that took about a week off of projects. The other delay is this lovely. 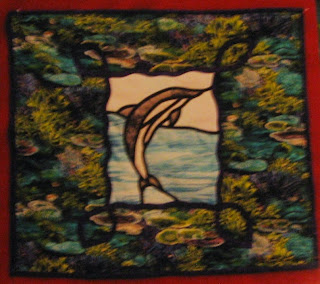 I picked this kit up from an Etsy shop called Bama Luna Supplies. Her pricing is a little inconsistent, but she has some nice items (great shop, but both orders I got smelled like cigarette smoke. Not sure if it her or the source, since she resells). I picked up several items, including another kit. Finished, this kit is about 17" x 20". Unfortunately, the instructions are bordering on worthless and I have had to research several new techniques and make several changes. For Example, the cute leaf shaped loop on the bias does not work out in assembly, since making them 4" will put them up next to the binding. Making them smaller is not possible due to the size of the bias (and I already shrunk that down from 5/8" to 1/2"). 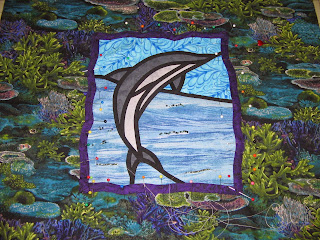 The 2 grey pieces that came with the kit were not to my taste, neither was the sky fabric, which looked more like cotton candy tie dye than sky. I am also adding some accent beadwork and hope to get to the actual quilting by the end of next week.
For a quick rundown on construction: the stained glass dolphin is a pattern, drawn on freezer paper, then cut out and then assembled atop iron-on stabilizer. Once the dolphin is attached to the stabilizer, the bias tape is measured and ironed on one piece at a time to create the stained glass look. After I squared up the background fabric, I centered the dolphin and added the purple bias. Since the original placement did not work out, I removed the loops and created mitered corners, although then I had to decide how to finish the corners. In the end, I trimmed the bottom piece of bias to be even with the outer side of the top piece of bias tape and gave the other end a tail to tuck into the bottom piece, flipping it under the mitered corner. This resulted in a small bump, but much better than having the end show.